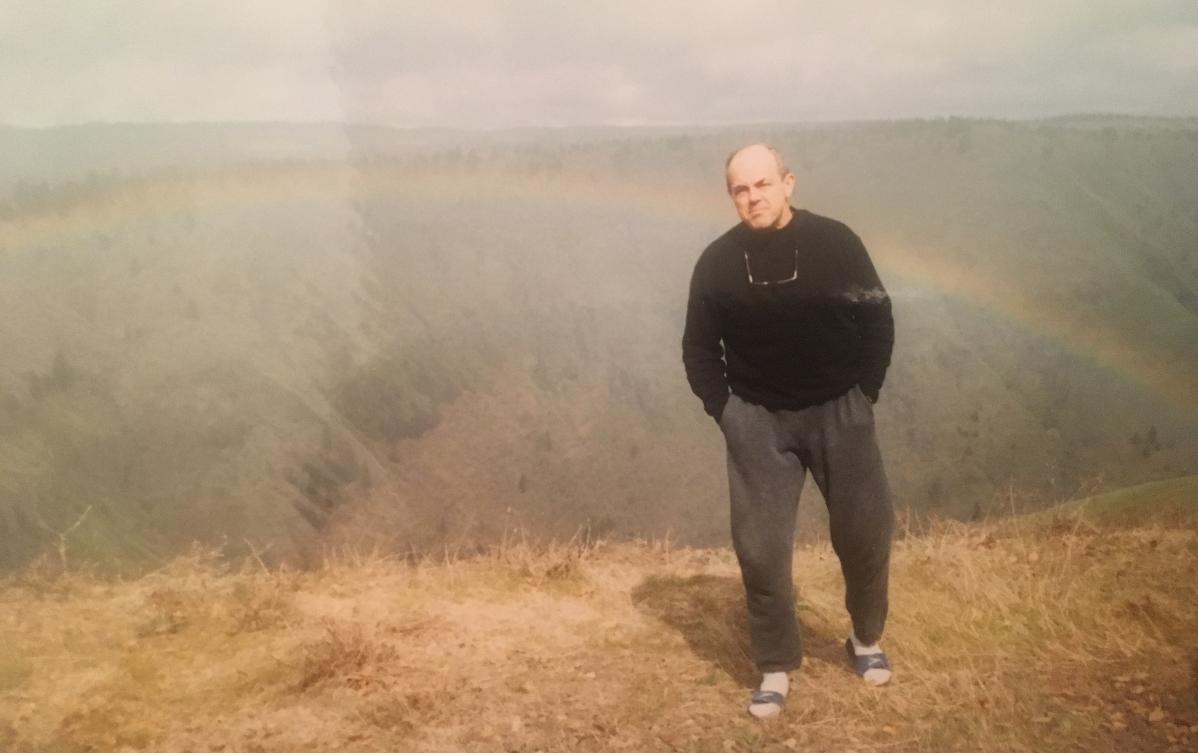 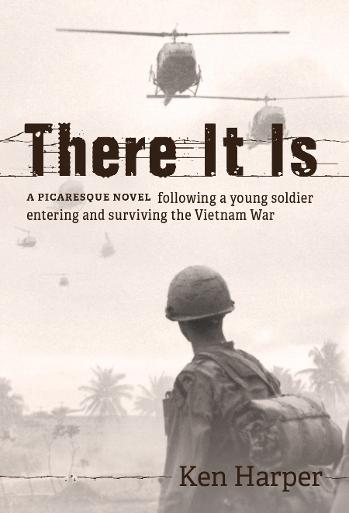 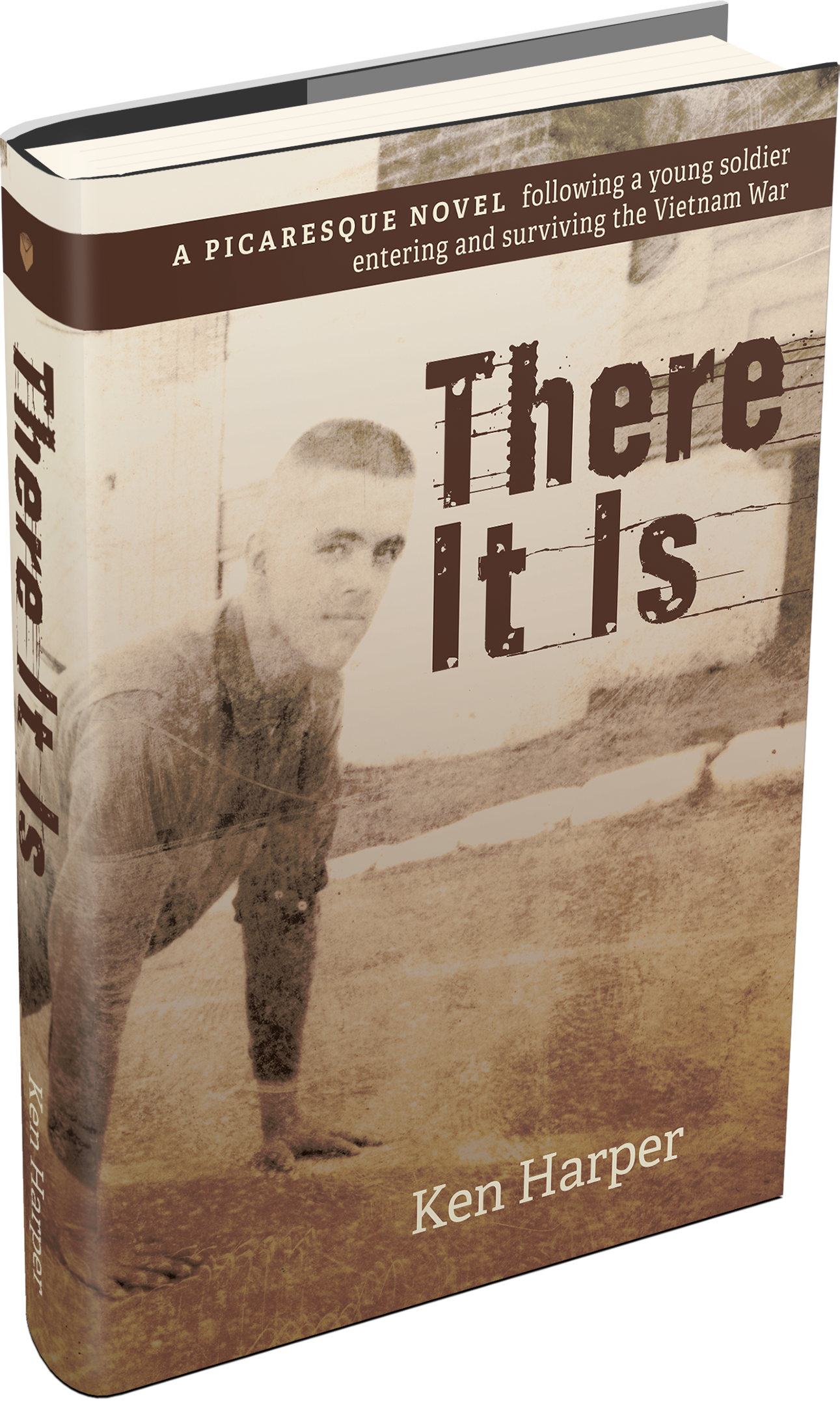 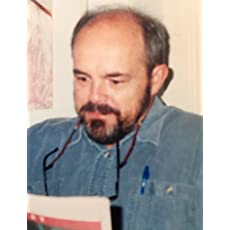 There It Is by Ken Harper is a quintessential American coming-of-age novel in the vein of Saul Bellow's The Adventures of Augie March.

It is a picaresque novel following a young soldier entering and surviving the Vietnam War.

Young Farragut Birdwell enlists in the army during the later years of the Vietnam War. He is the black sheep of the family; his dad is a decorated navy officer from WWII and does not have much confidence in his young son.

Farragut's attempts to fit in are often both humorous and heart-wrenching, from the opening story of how he fakes being a boxer to escape the dreaded cleaning duty as a grunt, to his catch-22 escape from joining the 101st Airborne Division when he lands in Vietnam.

Although Farragut is very clever and funny, at times he really messes up. Meeting the beautiful Yael sweetens him. This first novel by Ken Harper is an entertaining and compelling story about integrity, survival, and courage.

Ken Harper is a compassionate and irreverent new voice about the absurdity of war.

Ken Harper, a veteran of the Vietnam War, wrote two novels prior to his death in 2018. His wife was determined to get them published. After reading his first one, the mostly light-hearted, humorous There It Is (Luminare Press, 533 pp. $37, hardcover; $25, paper; $5, Kindle), I greatly look forward to the publication of the second novel in 2021.

Harper’s main character, Farragut Birdwell, tells his story in a self-aware, sarcastic, smart-ass manner. One of the delights of the novel is seeing Birdwell mature during his year in the Vietnam War.

Birdwell grew up in Chicago. When he joined the Army he ended up being assigned to Fort Holabird, the home of the Army Intelligence Center, in Baltimore.

Birdwell gets permission to start up a boxing club at Holabird, which he hopes will allow him to avoid “Saturday morning shit details.” When he tells his World War II Navy vet father about his pugilistic plan the only advice he receives is, “Hit more, get hit less.”

Birdwell spends off-duty time at an off-base coffeehouse, smoking weed and listening to literary discussions. Knowing he would likely be shipped to Vietnam, a buddy’s girlfriend says he should “go to Canada and avoid the whole shitaree.” Another buddy refers to Birdwell’s likely eventual destination as “Viet-fucking-death-comes-knocking-Nam.”

His job at Holabird involves doing background checks for security clearances. He gets pulled into some illegal activities, which result in him getting orders for Vietnam. It’s nearly the half-way point of the book when Birdwell arrives in country at a unit in Saigon that he’s told is “so far from the shit we can’t even smell it.” Before long, though, he’s sent into the field. At his new location he sleeps fully clothed at night, his rifle at arm’s reach.

Birdwell is not sure how encouraging an early letter from his father is when it says he should remember that “no matter how bad things get, they can always get worse.” Indeed, Birdwell ends up getting wounded in action. His job is coordinating intelligence, and he spends time gathering information on troop locations, friendly and non-friendly. He works a lot with maps until an officer tells him, “The map is never the territory—to know the territory means remaking the map. Which means we’re going into the territory.”

Harper includes several jarring incidents of extreme violence that stand out from the way most of the rest of the book is written. That’s appropriate, as violent acts can often lead to a sense of shock, which seems to be what’s happening here.

Not only is Birdwell telling this story, but several times he lets the reader get into his mind. In those cases we read short chapters then immediately learn that what we just read didn’t actually happen. Apparently they were merely fleeting thoughts in his head. That makes for a wild ride.

This book is fun to read, with a chuckle on page after page. Even some of the darker moments are treated with humor because if we don’t laugh at them we might just go crazy.

Or, as we often say during the war: There it is. 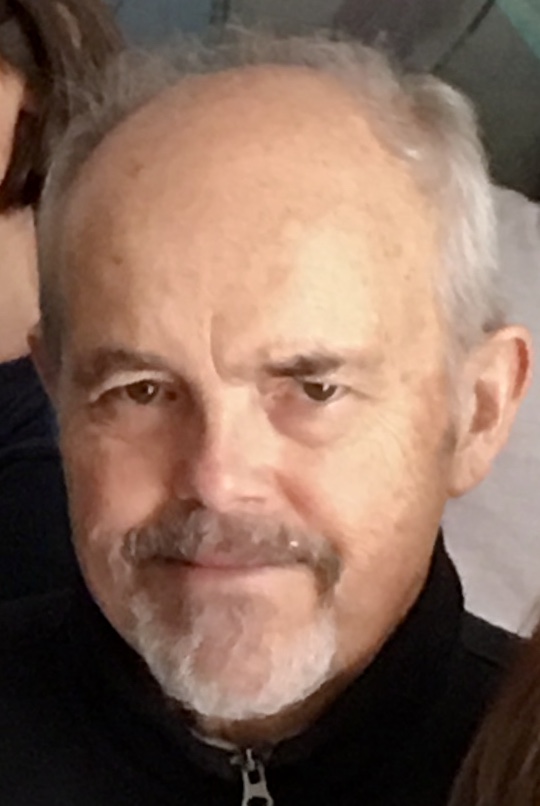 Ken Harper (1948-2018) was a freelance journalist forThe Des Moines Register, The Cleveland Plain Dealer, and In These Times. He attended the world-renowned Iowa Writers' Workshop in 1982.

His short stories were published in The Kenyon Review  and In These Times. From 1990 to 2018, Ken Harper was the director of marketing for large corporations within the computer industry. His children's story, The Spaceman from the Planet Omelet, was published in 2019. His novel, Big Shorty, will be published in 2021.

Excerpt from There It Is, Chapter 22

And then somebody pulled me up by the arms and somebody else flipped over the cushion I was sitting on and found two hand-rolled joints not at all resembling the Park Lanes I’d smoked.

“You want to explain this, soldier?” The somebodies were MPs who’d come upstairs to reinforce their brothers.

“Let’s see some ID, soldier,” the other MP somebody said.

With some effort, I produced my wallet. My heart was pounding. I was working hard to control the shakes. I showed them my military ID.

Freddie freed himself from the Mexican stand off on the band floor.

“And who are you, friend?” This was what passed as an invitation for Freddie to produce his ID. Which he did.

“What about your friend here.”

“What about him?” Freddie asked.

“He just checked into the unit. We’re showing him the town.”

“And what unit would that be?”

“And can you tell me why this is the second guy tonight we’re picking up who’s named Birdwell? Not exactly a common name,” the bigger of the two MPs said.

I didn’t know if he was talking to me or Freddie.

“This other Birdwell motherfucker said he had a 97 Charlie MOS, which I believe is an MI MOS, am I right? And he was wearing brand new fatigues.” The black MP looked at me and smiled without friendship.

“Only he didn’t have a 97 Charlie MOS, he was an 11 Bravo, and he was AWOL from the Big Red One. He was with a bunch of motherfuckers who were shooting at us. He any relation to you?” the black MP asked.

My head was clearing. I realized the black MP was in charge.

“Don’t fucking call me ‘sir,’ troop. Do I look like a fucking officer to you?”

“Uh, no you don’t, sergeant.” I could see he was an E‑5 from the black epaulettes stitched into his color. In the light, or the lack of light now that the music was off and the strobe wasn’t on, it was hard to see.

“So you think that motherfucker from the Big Red One was a random relative?”

“It’s a hard one to explain,” I said, not wanting to get into the details of what had led to this case of mistaken identity. “Anything’s possible.”

Maybe that was the point of the whole evening.

“You take this yahoo back with you to the 555th MI, soldier,” the black MP told Freddie. “And you—yeah you—”

“I ever see you again, you better have your shit straight. ID, pass, etc. You walk off that compound and you come to town, you mine. You got that?”

I nodded. I had to exert myself not to salute. 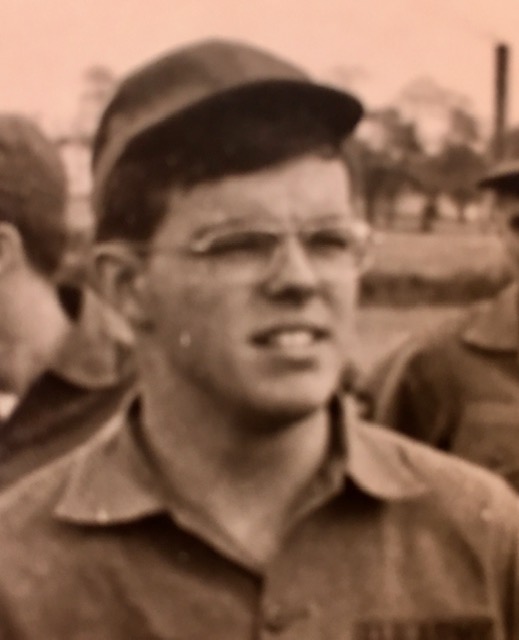 Excerpt from There It Is, Chapter 25

The earth moved again and again and again, but there were no ladies, just agents of death riding wherever they pleased, angels, devils, ghosts, VC, whatever. Agent Gloss kicked me as he shrimped out the door to the pallet walkway, low-crawling at high speed to the bunker the officers had been pissing on a couple of hours ago. I crawled into my flak jacket, pulled my boots on, grabbed my rifle and ammo, and followed suit. 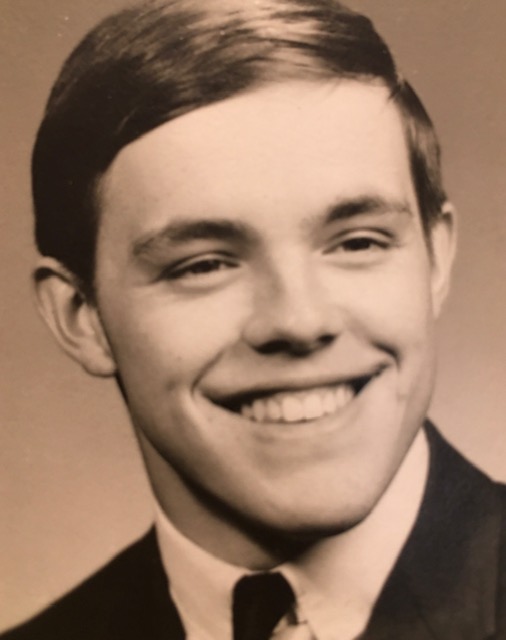 Excerpt from There It Is, Chapter 12

I had gone out for the freshman football team, thinking I would honor the family tradition in a reduced capacity, given my relative speed and diminutive stature. Zippin was a small, private school, smallness suggesting intimacy, collegiality, something my father thought would have a salutary effect. He’d felt anonymous at U.C. despite his athletic prowess. Zippin fielded decent football teams with state athletes who weren’t quite big enough or fast enough to play in the Big Ten. My freshman year they had a good recruiting class, and I think the only reason I made the squad was that they needed a certain number of players to go two-deep at every position, in case someone got hurt. Which turned out to be precisely why I was on the field for The Play. 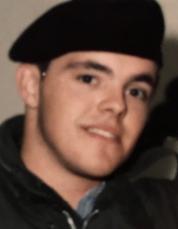 Excerpt from There It Is, Chapter 18

I walked outside. A pink Cadillac convertible was at the curb, top down, Yael behind the wheel, arm thrown across the passenger seat. She pointed. Sit. Here. Now. I threw my duffel in the back seat and climbed in. She peeled out, burning rubber, seriously deep pipes.

She reached over and touched my head. “How’d it go?“

"There it Is," Ken Harper's new novel, serves as a powerful written companion to the 2019 movie "The Last Full Measure." Watch the trailer of the movie above. One of the characters from "There It Is," Captain Christ,  chases the CIB - Combat Infantryman Badge - as an insurance for his ongoing career in the military. Ken Harper's irreverent voice is a powerful advocate for the valor of the lower-ranking soldiers.

© Copyright There It Is